Will the Real Minnesota Iceman Please Stand Up

June 30, 2013
As much mystery surrounds the Minnesota Iceman as does ice. The famous Frank Hansen exhibit of the 60's has been talked about and argued throughout Bigfoot circles since the frozen creature first started making its rounds in shopping malls and county fairs across America. Speculation, hearsay, and rumors abound, the creature seemingly vanished like its Bigfoot counterpart, forever leaving the question of "Was it real?"

Several researchers had the opportunity to see the exhibit first hand as it was paraded across the country, while a select few even had the chance to inspect the creature first hand. Although it was encapsulated within its icy tomb at the time, two very notable researchers who had inspected the corpse believed the creature to be real. Was it the smell of decaying flesh they smelled through melted areas of ice? Or was it simply part of the attraction, perhaps some road kill or rotted meat hidden within the exhibit?

After vanishing, the Iceman stayed hidden, and many considered it gone forever. But, as they say, you can find anything on eBay. The creature recently resurfaced in an online auction, sold to Steve Busti, owner of the Museum of Weird in Austin, Texas. Busti will put the mysterious creature back on display for the viewing pleasure of the public on July 3rd reportedly. But before you plan your road trip to the Lone Star state to see what may or may not be the real missing link on ice, I suggest you take a look at the following article that I ran across years ago.

John Robinson of www.sideshowworld.com interviewed a man by the name of Rick West, a side show operator who's carnival attractions have been seen all over the United States for many years. The interview is quite lengthy, but by reading it you can clearly see the context of which the Minnesota Iceman is mentioned.

The website and interview contained within has nothing to do with Bigfoot. The man being interviewed was not being interviewed about Bigfoot, and from what I can tell would have no reason to fabricate his story. I also think this person, Rick West, would be more "in the know" about the truth of the exhibit than a Bigfoot researcher would have ever been. West was a main player in the world of the traveling sideshow, in the industry so to speak, and would not have been considered a "mark" like the rest of us. To save you the trouble, here's the specific portion of the interview that pertains to our frozen friend.

SW:  What was your strangest show?
RW:  The strangest for me was the Big Foot Creature Exhibit. It was the only exhibit I didn’t frame, although I did make many changes to the show after I bought it from Tyrone Malone. I felt I could have framed an exhibit I liked better starting from scratch. The show went over great some places and died in others, where as my other shows seem to do OK almost everywhere. It was also my first time working with a gaff. It took a little different approach.
SW:  The Big Foot Creature Exhibit, that sounds very interesting, when did you have the show out, does someone have the show out today and what was it?
RW:  It was in the 70’s that I first started showing the Creature. I believe the last year I had it out was 84. I never saw the show after I sold to Rick Owens. I do know it went to California.
Johnny Chambers, who did the make-up for “Planet of the Apes” built the creature. And Jerry ‘Tyron’ Malone designed the show. Jerry was known for his frozen whale exhibit and later his custom racing semi tractors. The creature was shown in a big case with a glass top. I used a chemical on the underside of the glass that made it look frosted. Looked like the creature was frozen.  I also had another creature that a friend and I built out of latex. That’s another story.
But the best creature ever shown was Frank Hansen’s. He brought his exhibit out in 1967. I met him at his first fair. His creature was encased in ice and shown in a custom-built freezer.  It is quite a story; people thought the creature was real. Many people still believe it was real. I had the chance to go up and visit Frank shortly before his death. I even had the opportunity to purchase the creature and the exhibit…
”Preserved Forever in a Coffin of Ice!”
You know, I should have bought it.

Another interesting aspect of what Rick West claims is that John Chambers, famous makeup artist from "Planet of the Apes", made the creature for West's Bigfoot exhibit. Which Rick started showing in the 70's, and could have very easily been under construction in the late 60's. Could this sideshow Bigfoot be responsible for creating the rumor that John Chambers made the costume for Patty in the Patterson-Gimlin film? Think for a moment how rumors change as they get passed along. Perhaps Chambers did create a Bigfoot creature, and people were just confused as to which one he was responsible for. Like getting to the center of a Tootsie Pop, the world may never know. 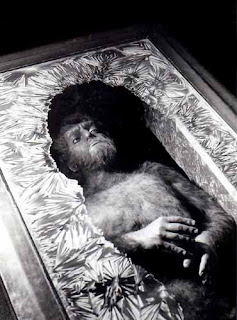 Popular posts from this blog

Bigfoot and the Coronavirus

With the spread of the new coronavirus, we take a look at past epidemics and how they could have shaped the modern day behavior and populations of bigfoot in North America. 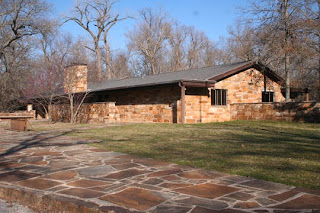 In the fall of 2002, Matt Knapp was a greenhorn in the world of Bigfoot. Granted, I had been in the "community" for awhile, I even had a couple outings under my belt, but as far as any real Bigfoot experience, I had nothing. I knew by this time that something seemed to be out there. I had seen tracks, heard sounds, met people I considered credible, even experienced rocks thrown by phantom strangers lurking within the darkened treeline. So yeah, I knew something was out there. I even thought at that point in time I knew Bigfoot was real. On the night of September 21, 2002 I would have my little world come crashing down around me. Due to the events of that night, I would realize that previously I didn't actually know anything, I just thought I did.

I had joined up with a small group of researchers known as The Monkey Chasers. There's no grand story about why I ended up with that group. They had members in Oklahoma, where I'm from, and they would all hangout on the …
Read more 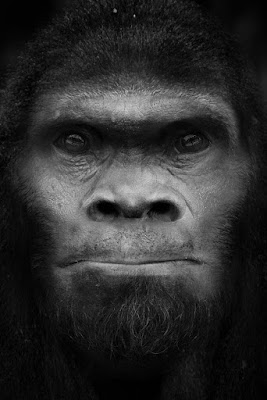 In the late 70's, investigator Doug Trapp interviewed several military guards from Edward's AFB about bigfoot. They agreed to talk to him as long as their identities were kept private.